The question about the goal

I got asked why I do this blog the other day. That question is both an opportunity, and a deadly trap.

Why am I doing this blog? I have to force myself to ask this question now and then. It’s a down side to being a process guy. I’m involved and invested in the experience to the degree that I sometimes forget that having a goal is not an entirely bad thing. I don’t think it should be the only thing, or even the greatest thing. I still believe that if a thing is worth doing, the doing of it will be an enriching experience. You will learn, you will grow, and you will better.

Which was one of my motivations: bettering my writing and photos. Maybe I could produce something worthwhile. Maybe I could sharpen my vision and life. Requiring myself to focus on what I am doing has only made the experience better. It wasn’t the stated goal, but it is a very happy result.

But there isn’t a goal that I can reach and say I am finished. I don’t think I’ll ever hit a spot where I go “yeah, that’s good enough.” and just quit. I don’t think I can say I’ve ridden the bike enough miles, or run enough film through the cameras, or been outside long enough. I don’t think that day will ever come. 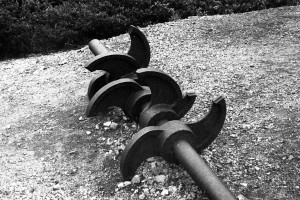 So what do I do if there’s no finish? What do I do if this journey is not like a hike, with a start and a finish? I kind of feel that kind of goal is a trap. If you finish something, it’s over. I’ve listened to an interview with one of the guys that climbed the Dawn Wall, and finishing that climb kind of destroyed him. He’d dedicated years of his life, climbing segments of the route, pouring over maps, investigating possibilities, looking for a way to do that climb. Then it was done, and his life suddenly had a huge gaping hole where that climb used to be. He had nothing to fill it. It left him lost.

I don’t want a goal like that. I don’t want that to be the result. So my goal doesn’t have a finish line. I will die without ever becoming as good a photographer as I could be. Instead of being depressing, that’s a great, wondrous thing. I have my whole life to make strides and better myself. Every single day will offer me the opportunity to do it. I want as many of those days as I can have. I am going to enjoy every single last one of them. Even the days filled with frustration and lack of result are good ones. If nothing else, they feed the next day a breakthrough occurs and make them sweeter.

So there is no finish line. There is no finite, quantifiable goal. And if you enjoy the process, this is the greatest thing in the world.