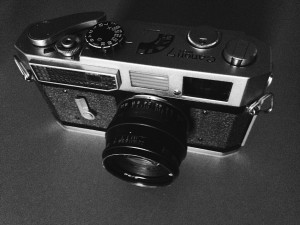 I seem to have picked up a rangefinder habit, lately. The Canon 7 is the latest symptom of it.

It’s the Zorki’s fault. I love shooting with it, and the Jupiter 8 is a great lens. But it had some, er, quirks. It has the classic CCCP rangefinder requirement of winding before shooting.  Winding itself has the typical Soviet walnut grinding noise that seems to be a requirement of being a Soviet camera. When the shutter is released, it’s not really stealthy. The rangefinder is only set up for 50mm focal distance. Shooting with my 35mm was guesswork. And mostly, I was guessing wrong when I shot with it. While these are gripes, I wasn’t going to abandon the Zorki. For all its quirks, it’s a great camera and very enjoyable to shoot with.

But I wanted a bit more. A meter, for instance, is nice to have, and makes shooting faster. Initially I looked for a meter that would mount on a shoe, but then found out about the Bessa R. All that plastic kind of turned me off of it, so I had decided on a Bessa R2, but they were pricey, so I just carried on. Then a Canon 7 Rangefinder came up.

The 7 was Canon’s last line of rangefinders. They’d done like the Soviets and other Japanese companies and started by copying the Barnack Leica bodies, then moved on to their own designs. The 7 and it’s two variants co-existed with the new line of SLRs that would replace them. They were designed for the epic 50mm/f 0.95 lens, the fastest glass Canon made. Those lenses are neither cheap nor easy to find, and they require a mounting adapter, so it’s doubtful I’ll ever have one.

I bought a Canon 7 so that I could use my existing two M39 lenses, the Jupiter 8 and the Jupiter 12. Opinions varied as to whether the Jupiter 12 would work. I’ve tested mine for clearances and it fits just fine. The rear element clears the shutter with enough room. I haven’t shot with it yet, but that’s on the agenda for the next few days. 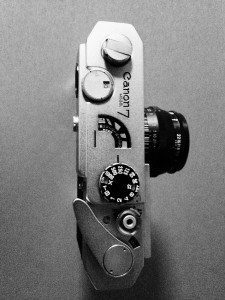 The meter was responsive, but it wasn’t reading correctly. I spent a little while adjusting it to mirror the readings of my handheld light meter, using the adjustment wheel on the back of the top plate. I realized it had a high and low setting, and I needed to use different readings to get the correct one. Once I did that, it’s been right on the money. While it’s uncoupled and requires me to take a reading then shoot, it’s still faster than using a hand-held and a vast improvement. It is limited to 400 ASA as the highest speed. Anything faster and I’ll have to go back to the hand-held meter or do a little math. Still, it’s useful to have.

The film transport is nice and quiet. So is the shutter, even though it is not cloth. It’s a rubber coated metal shutter. Compared to the Kalashnikov bolt sound of the Zorki,  it’s almost silent. It is not as quiet as the Olympus XA, though. The viewfinder is nice and bright, with parallax correction and selectable frame lines that you can adjust to the focal length of the lens you have on it.

I do have a problem finding the shutter release. It isn’t where I think it should be and so I’ve missed a few shots fumbling around for the thing in the moment. The 7 definitely  has the ergonomics of the early 60s. It’s basically a chrome box, with no thought as to how the hand is to grip it. It hangs oddly from the strap as well, something I may address with a case, like I did with the Zorki’s strap problem.

Still, it’s a significant upgrade to what I’ve previously been shooting M39 lenses with, and it set me back a little more than a quarter of the price of the R2 I was looking at previously.  It’s an excellent camera to use.