I admit, I like cameras some others think of as, well, crappy. This is one of those cameras.

The Anscoflex II was one of the many pseudo-TLR cameras that were all the craze in the 1950s. If you had real money, you went to a camera store and bought a Rolleiflex TLR to shoot with. Something classy. If you didn’t have the cash, you went to a department store and bought an Anscoflex II. The II designation indicated it had the added close up lens and yellow filter for improvement of contrast on black and white film. Note I said it’s a pseudo-TLR. It looks like a Twin Lens Reflex, but it isn’t. It’s merely a dressed up box camera, a Brownie in drag. Like most box cameras, it’s best looked at as a toy camera. 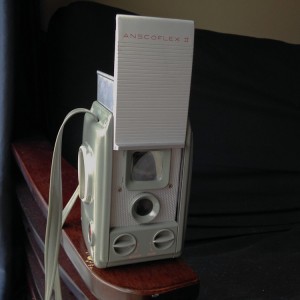 Ansco brought in Loewy to make this camera look good. Loewy had a huge reputation in the industrial design world. After all, he was the man who designed the Coke bottle: the most recognized design on the planet. He did a number of locomotive designs for the railroads, the emblem for the Coast Guard, cars, Greyhound busses, the Skylab space station, you name it. The design of the camera is clean and crisp even now – sixty years later.

The garage door lens cover opens to allow you to get down to business. It has a viewfinder that is one of the best I’ve ever seen. Huge and bright. Bigger than most TLR cameras that cost ten times more. But it has only a 1/60th second shutter and a f11 plastic lens. Still, the quirky pictures it produces have a charm. Which is why I keep it. True, I have to roll the film on to 620 spools in a dark bag to use in it, but it’s not that bad to do and it’s kind of nice to use a simple, basic camera where the only choice you have is framing. Well, that and whether or not to use the closeup lens or the yellow one. It’s a fun little beast to shoot with.