Sometimes, as I have said, I really like some crappy cameras. Ones with lenses with soft focus built-in. Ones with an absence of control. Ones that have a single shutter speed and no pretensions. This is one of those cameras.

The Ansco company that made this camera is not the Ansco company that made the Anscoflex II I reviewed here. The original Ansco had died by that point, and when this wee beast was made, some thirty years or so later, Ansco was just a name in a portfolio that had been sold to another manufacturer. This camera, like many cameras made of plastic in China, was available under a couple different names, but this one was the most famous.

During the 80s, there was a craze for these faux panoramic cameras. Real panoramic cameras had a swing mechanism that was mechanical that moved the open lens over a large area of film and produced a panoramic image. I can remember the whole school lining up on bleachers for one of these images when I was in grade school. The real fun was had by the older kids, who knelt at one end of the bleachers, then raced behind them, beating the camera to the other end so that they showed up twice in the same frame. They all got yelled at for it.  There are some real panoramic cameras that can still be had new. The Horizon 35mm is a proper panoramic camera, and there are some other custom-built models available. These Ansco cameras, however, were not true panoramic cameras. They were just a standard, primitive 35mm plastic point and shoot with a mask that eliminated the majority of the frame to give you a sort of panoramic effect. 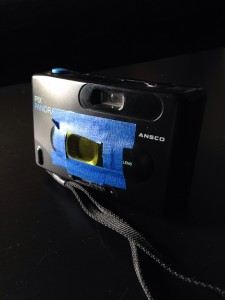 The most common of these cameras, and at a whopping $10 a pop the cheapest by far, was the Kodak Funsaver Panoramic. They were little plastic single use cameras preloaded with film that you just returned to the processor when you were done with them. The guy at the processor would crack it open, pull the film to process, then throw the camera away. You bought a new camera if you wanted to try it again. Although, not everyone did that with their Funsavers.

Deon Reynolds (website here) has been reusing Funsaver Panoramics for years, shooting some of the wild places in Nevada. He shoots primarily along US 50, “The Loneliest Road in America” and among the abandoned ranches in his home state. His prints are particularly amazing. He can somehow extract an image from a sub 35 mm frame and make a print that is 30 or so inches wide. They are incredible to see in person.

Taking a cue from Deon, I have a couple of these little gems of my own. I plan to shoot mining ruins with them some day, but the opportunity hasn’t happened yet. They are exceedingly light, so I’m sure they’ll come backpacking with me soon. As you can see, I’ve taped a bit of yellow cellophane over the lens to sharpen the image a bit. It gives a little quirky result I am fond of.

The best results come from thought and effort behind the camera. These little beasts are a good tool for learning that lesson.