I think I don’t do that enough. It’s not that I don’t think about shooting when I go out. I know I’m going out for lunch today, in a few hours, and I’m already thinking about what camera and what film I’ll be taking. You should take a camera with you every time you go farther than the living room, I think. There is a great world out there, full of wonders that wait for you right around the corner. Not taking a camera with you makes sure you’ll miss things.  I’m not advocating for less of that. I think there needs to be something more, as well.

I’ve been watching a lot of videos about large format photographers. They are the masters of shooting deliberately.

The most recent one I watched was an introduction of Nobuyuki Kobayashi. The video followed him while he was going out and shooting. Most of the time, he didn’t have a camera with him. It seemed contradictory to me. But by that contradiction, he was showing me how he was shooting deliberately. He walked around just looking. Just taking nature in and seeing it, as if for the first time. He wore an expression of wonder the whole time he did this. When he found a shot he wanted to take, he would go back and get his huge view camera and set the whole thing up. Using the practiced, fluid movements I have only seen in Buddhist monks and master martial artists, he would prepare the shot and then take it. It was marvelous.

I need that kind of deliberate shooting in my life. I want it. It was enlightening to watch, and the results were beautiful.

I suppose the argument could be made that part of what he was doing was dictated by the camera he was using. Not many want to spend time lugging a sixty pound view camera around in the woods. I know I’m probably not up to that task. Although, I’m toying with hacking a 4×5 camera together for myself. So I guess I’ll be lugging a bit more weight up mountains in the near future. But in the process, I’ll be making some changes to more than what I’m carrying and shooting with. I am going to step back, and try to see things in a new way. 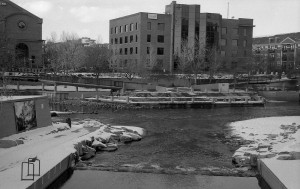 This is the video of Nobuyuki Kobayashi I was speaking of before:

（English sub）Portrait of Nature – Myriads of Gods on Platinum Palladium Prints – from augment5 Inc. on Vimeo.