One of those days.

Lots of blank pages. Nothing but blank pages. The cap is firmly screwed on my pen, not posted. I don’t have a camera loaded. The only camera in a bag is just there because I haven’t unloaded it from the last outing. My screens are white empty word processing pages only populated by blinking cursors, mocking me. I’m tired from not sleeping well. Uninspired. I’m having one of those days.

The well established way to try to restart the creative juices among photographers is to go buy a new widget and play with it. See if it opens up a new approach to the problem. Many times, that works. New gear forces you to look at things in new ways. This approach is not all bad. But for the foreseeable future, I am not going to buy anything new. Well, other than film. I have gear I haven’t used, and that chafes. A camera is potential, and unrealized potential is a waste. Plus, there are some pretty major undertakings in the future, and I need to save up a bit. 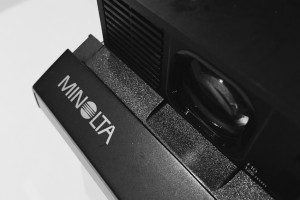 I may revisit some older gear. I haven’t bought any instant film for a long time. Over a year, at least. I tried to sell my Minolta Instant, which uses Spectra film. There were no takers, so it’s sat unwanted on a shelf. I still have a few packs of Spectra film. I may have to drag that out and see if that has the same effect as buying new gear. See if it forces a perspective change.

The weather report has been variable. By which I mean they say it’s going to snow, rather a big snowstorm, but no one can agree to exactly when this is going to happen. Maybe today, maybe tomorrow. One of those days. It’s slightly complicating the planning.

I may just grab some random film, slap it in one of my XAs and pedal out for a while. I love the bike paths here, but all but one of them has construction going on. If I ride south, I’ll have to roll though the warehouses for a while, dodging the work. West the detour drops you on a two lane that feeds from the interstate to an industrial district, leaving you to deal with semi trucks on a road with no shoulder. Cherry Creek is awash in roadies who think the path is their own personal raceway, and if you show up and make them slack off their target heart rate, they get nasty about it. Sand Creek to the southeast sounds best, but it’s still diverted for flood restoration and construction of the new commuter rail line to the airport, and the detour wasn’t particularly well-marked last time I tried it. We may just have to flip a coin and let it choose our poison.

I dislike days like this. But the only way around them is through. And the sooner I get a move on, the sooner it will stop being one of those days.