Not much to look at, but a huge success- the Kodak Instamatic 104 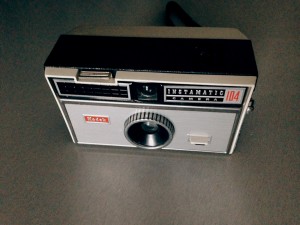 My first camera was a Diana, which I got by earning a number of points in either a magazine or candy sale, I forget which. My mother didn’t want to fool with roll film, as I don’t think they sold it at the JCPenney’s camera counter where she bought every camera she ever owned. It used the 126 film cartridge. This was basically a roll of 35mm film in a plastic cartridge that allowed it to be loaded easily. Kodak sold these cartridges by the boatload. The 104 was an improvement on the 100 model, allowing the use of the brand new flash cubes.

The cameras were cheap. They were stamped aluminum, and had more simulated features than real ones. The lens, a fixed plastic f11 43mm, had a simulated ribbed focus ring around it. Under the simple lever shutter release was a simulated selenium cell exposure meter. The only other things it would have needed to be complete would have been a simulated shutter speed and simulated f-stop dials. There was no tripod socket, and they were clad in genuine fake leather.

But even though these cameras are nothing special, they had the one thing Kodak wanted. They were profitable. There were somewhere between 50 and 60 million Instamatics made, and that produced a relentless hunger for Kodak’s cartridges. They may have sold these cameras at a break even, or a loss sometimes, but they were worth their weight in gold.

I toyed with the idea of getting some 126 film off eBay and trying it a few times. I’ve looked around for the old cartridge I had with it many moons ago to see if I could hack it together with fresh film. But to tell the truth, I seem to recall the pictures this thing made to be uninspiring.

So why do I keep it? I’m not sure. I think this is the camera that took the first pictures of me ever, a snapshot while I was being wheeled in my mother’s arms out of the hospital as an infant. It recorded our family life when I was small. And it was the first camera I ever took a picture with. The first one that thought me the magic and joys of photography. I suppose I’ll keep it, even if it’s not much more than a paperweight. It gets the only exemption to the rule of my camera collection: use it or get rid of it. I suppose being first is worth something.