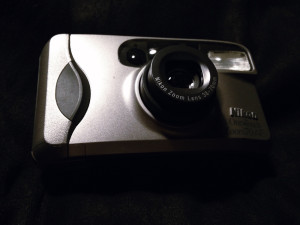 The other day, Nate Matos posted a picture of a Nikon F that someone had just given to him, since they knew he was a film guy and it was a film camera. I never get that sort of thing. If I get a Nikon, it’s more like this one: a One Touch Zoom 70 AF. Clearly, I’m doing it wrong.

It is true I get cameras given to me just because I’m the only film shooter most of my friends know. From time to time, they’ll find a camera in a drawer or closet or someplace, realize it uses film, and hand it to me next time they see me. It’s a feature of shooting film: free cameras.

During the 80s and 90s, this sort of camera was pretty common. A point and shoot with little to no control over the image and a tiny viewfinder. Most of them, oddly enough, were this same silver/champagne color plastic with the retracting zoom that popped out when the power switch was hit.

This Nikon One Touch has basically four modes: flash, no flash, timer, and auto. Selecting one of those modes is about it for creative control. Well, aside from deciding whether or not to zoom in. It defaults to flash mode, so you have to cycle it and turn things off every time you start it up. It also features a date stamp imprinter. I had no idea how to turn that off, but I lucked out when randomly pressing the buttons and got that result I wanted. I purchased an expired roll of Fuji c-41 at Englewood Camera and popped the back, with low expectations. The little Nikon whirred to life when I touched the power button and loaded the film on the first try, and it was off to the races.

The little viewfinder has a bright framing line of a sort, and LEDs to indicate if the flash was ready. I couldn’t tell if anything was in focus. If it hadn’t of been, I had no way to fix that anyway, so I went ahead and snap-shotted merrily away.

The images reminded me of the horrible photos that used to be the result of a family outing. It didn’t help the film was so old it had shifted blue, which was also compounded by the overcast days that were the norm last month. The results make me want to just rid myself of this camera. The point and shoot zooms of that era were not worth the time it took to shoot a roll of film with them, sadly.

I don’t think I’ll get a camera like an F handed to me anytime soon. I already have a box of point and shoots, and it’s likely I’ll see more when the chance arrives.

I need to up my game. I really am doing it wrong.