The one that fits- revisiting the Nikon F3

“Digital photographers buy cameras because they’re better than last years model. Film peeps are just looking for the one that suits them best” Dan K

When I first started this site, the very first Gear Wednesday post was an ode to the Nikon F3. I’d used one back in the day, and lusted after one, and finally gotten one. And it was a perfect fit.

I tend to put some cameras down and not pick them up for a long time, and some just go away from me as a result. But this one gets picked up over and over again. There are many reasons. It’s about as bullet proof a camera as I have ever used, electronics and all. It’s not a young camera either, the serial numbers indicate it was made in December of 1983, so next month it will be thirty two years old. It’s been given a CLA once to my knowledge. I think the seals are original. I change the batteries in it once a year. The LCD works well, although one segment is getting a little dim.

Unlike almost everything else from that era, the ergonomics actually work. That is a testament to the genius of Giorgetto Giugiaro. Not much else from that era has any ergonomic utility at all. It’s still a  joy to use. When I pick it up it simply fits my hand. The viewfinder gives the right amount of information, and all of the controls are exactly where I expect them to be. Even though there is only a simple spot meter, it’s perfect every time. It’s the most automated camera I own, and I think it’s just the right amount. Anything more than this and I would be leaving it on the shelf instead of using it. 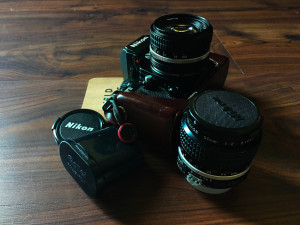 I’ve only picked up a couple of lenses for it. A Nikkor 50mm f/1.4 and a 35mm f/2. Both sharp and well built. They fit my style of storytelling. I toy with the idea of a wide, like a 24mm or maybe wider, and I’d love to pick up a 85mm for portraits. I doubt I’ll ever get anything beyond that, though.

It still sounds like a love story when I write about this camera. It’s the one that suits me best.