This winter has been more busy than most. I’m finding myself spending as much time as I can outside, hiking more than usual to stay as fit as I can, and trying to be as diligent as I can working on projects. I’m trying to be the stream this winter, and not the ice.

I’m not always hitting my goal of at least 1,500 words a week on one of the ongoing writing projects, but most weeks I am close. I’m making a cut on final images for another project, and in the process I am becoming better at scanning. I’m making steps toward starting a new project involving portraiture, but with little to show for it so far. But nice constant progress is afoot, and there is nothing more exciting than that.

Of course, there was an off-hand discussion on Twitter a little while back, and now I’m looking in to another little project.

It’s no secret I love the state I live in. I chose it to make my home, and I wouldn’t live much of anywhere else. For the first time, I’ve found a place I belong, instead of feeling stuck somewhere. I’m pretty bad at beating the gong about the place as well. So when a random comment I made about getting together a photographic expedition in the state was well received, I started to put a little time in to planning. 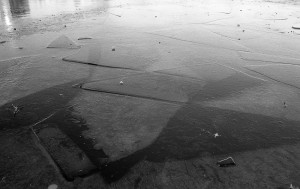 My beloved knows I do love to plan. She’ll always know something is afoot when the obscure Internet searches begin. Then maps will get drug out. There will be specific books referenced. I think the process amuses her.

It’s still early. There are a lot of variables. Should it be a vehicle accessible only tour so the large format guys don’t get a hernia moving gear around? Should there be some hiking? Should it concentrate on natural beauty in forests and mountains, or should there be ghost towns and abandoned mines thrown in there? Stay in small town hotels, or camp out? Climb high or shoot up to get vistas? Time it for peak wildflowers or peak fall foliage?

Narrowing down variables and doing the scouting legwork is fun. And on top of that, it’s making it easier this winter to not become the frozen water, but keep being the moving water.