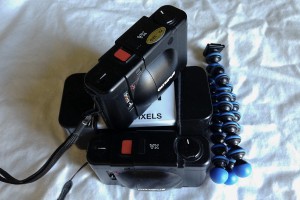 Sometimes, less is more. This is one of those times.

My stuff gets rained on, hucked in to bags and bounced down trails on the backs of bicycles. It gets hiked to remote regions of this fine state in search of ghost towns. It rattles around in the back of my 4Runner. It does not lead a charmed, protected life. It rarely sits on shelves.

Because a good number of those activities involve getting where I am going by the sweat of my brow, I’m beginning to appreciate travelling light. Which is the genesis of what you see here, my road gear.

In 1979, they had just introduced the Olympus XA camera. Erich wanted to travel light, and the XA was the lightest of the light, so he bought one. It’s a little larger than a deck of cards. The lens is a wonder: fast (f2.8) and sharp as a razor. Rangefinder focus. Aperture priority. Metal body. Tough, light, and with more control than the point and shoot cameras that would follow in the 80s. Erich took this camera, and bought a train pass to travel France with his wife. It was a street shooter’s dream. He could be invisible with that tiny camera, and still produce admirable work. Very admirable work.

I looked at his shots, and thought to myself- old Erich was on to something there. I don’t shoot street, but there is an advantage to being invisible with a camera. That camera was so light, so tiny. I bought myself one. It led a uncharmed, unprotected, and brief life. I shot the streets of Chicago with it, and then I dropped it on the marble floor of Memphis Union Station late one night while waiting on the City of New Orleans. But what shots I did get were memorable enough to lead me to another one. 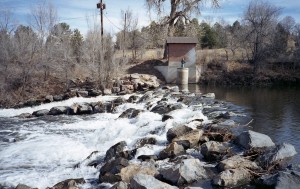 The second XA lived in my pack. It was my backup camera if I needed one on shoots. I shot a model with it once, feeling a little silly while I did. The XA is impossible to use with conventional flash or speed lights, since it has a very wonky flash interface, but I’m a daylight shooter so that worked. I documented hikes and overlanding down fire roads and trails to abandoned mines. The XA can be awkward to use, with the short throw focus and weirdly sensitive red shutter button, but ergonomics aren’t everything. Image trumps all.

I went ahead and bought a third. The second is now labeled C for color, the third B for black and white. Very clever, I know. Both of them, my film case from Japan Camera Hunter, and the tiniest tripod Gorilla makes all  weigh around two pounds together. They all fit in my waterproof saddle trunk, under the seat of my bicycle. Or in the pockets of my M65 field jacket. Or they take up just a fraction of the space in my pack. Having fine tools like these is a wonderful thing.

So while you could blame Erich, I feel indebted to him. Without his work, I’d of never known about the XA.

Take a look at Erich’s work with the XA here: Train Journey Through France

Then, look for an XA at KEH and save yourself from the troubles of eBay.