Is that really in your bag?

Everyone knows those “In your bag” sites. Japan Camera Hunter runs the best and most famous one. There will be a picture of a bag, with all the gear pulled out and arranged , and a description of what the gear is, and why it’s carried. I look at the gear some people say they carry and I wonder.

Are they really carrying all that stuff around?

I don’t carry three to five bodies and six to eight lenses all the time. I don’t see the need too. Plus, I think carrying a Mamiya RB67 with four backs, a Yashica Mat 124G, a Nikon F4s, a Nikon D4 and a Leica M6, plus a couple spare lenses, a couple of flashes, a laptop, chargers, film, an iPad, spare batteries and so on isn’t well thought out. If you shoehorn all that in to a shoulder bag, you’re going to kill your shoulder carrying it all. Hell, carrying that level of gear is approaching the point where you’re better off hiring a Sherpa.

I just don’t feel the need to tote that many things in my bag. I’m getting older and I like being comfortable when I walk. Comfy shoes or boots, adaptable clothes, nice and even weight distribution, and minimal gear.

So what do I carry around? 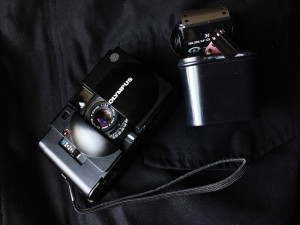 This time of year, if I want to go light, I wear an M65 Field Jacket. I put an Olympus XA and a reused Rollei film case that carries two spare rolls in my pocket, and away I go. No bag required.

If I’m on my bike, I’ll add an additional camera, probably a plastic 35mm pseudo panorama, one of Japan Camera Hunter’s film cases, the smallest Gorilla pod they make, and a couple of spare button batteries. It all fits with ease in my seat bag and leaves me room for a couple Clif bars.

I bought a Tamrac 4252 Jazz Messenger 2 on the cheap. KEH was selling them for $10 one day, and I have a bag problem, so I ordered it up. It’s about as big a bag as I ever walk about with. One body, a spare lens or two tops, and a couple rolls of film. It turns out to be just the right size to fit in my day pack as well. If I’m going to the back country, I’ll put it in the klettersack I use, on top of the clothes and food I’m taking with me. Pretty much the same if I’m traveling, although I’ll have less outdoorsy gear and add a laptop at that point. If I’m around town, I’ll delete most of the clothes and let the laptop keep it company.

I do have a whopping Domke bag that holds my 4×5, but that’s for door to door transport more than anything else. I’ll take that bag on the train some times, but the cameras get left behind when I do.

I’ve been amazed at what I see on some of those bag sites. I have an urge for simplicity that’s far too strong to let me carry around as much as most of them. Plus, that would mess with the default level of lazy I like to use.