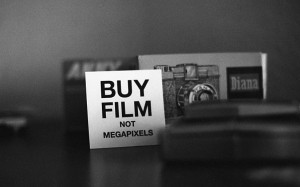 I think I’ll do that photographer thing and talk about cameras. Photography is pretty weird, when you think about it. It’s the only art that is fixated on gear. Ever hear anyone talk about how they use the same chisel as a particular sculptor? The same brushes as a  cubist?

Thing is, I don’t have very many cameras. I don’t suffer from G.A.S. (Gear Acquisition Syndrome). I tried the one film, one camera, one lens approach for a year once, and it was great. It also kept me from buying much new gear. It broke me of the habit of running about buying this, or that, trying for a look or something. It helped me find a voice that comes through no matter what I shoot. I rarely buy new cameras. If I do and I don’t use a camera for longer than a few months, I sell it or get rid of it. The worst thing you can do for an old camera is leave it sitting on the shelf for long periods of time. Get it in the hands of someone who shoots.

I’m a photographer, not a camera collector.

So with that in mind, I’m going to cover much more than just cameras on this Wednesday thing.

Steph, my partner,  likes to kid me about being in touch with my inner female, the way I like camera bags and am always poking around trying to find the perfect one. Panniers I see much the same way. So expect to see a few of those. Camping gear. Bicycles and their accessories. Could be just about anything.

That sticker in the photo, by the way, is from gradeselect. You should get you one. Or a dozen, and spread the truth.