Does everything ok, nothing extraordinarily well- the Vivitar 400/SL 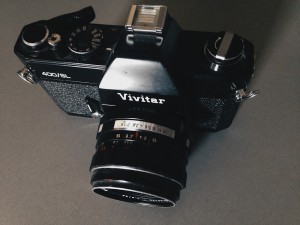 I think it says a lot about how bad my GAS used to be to admit I have this camera.

This is a Vivitar 400/SL. Vivitar once sold anything and everything photography related. Lenses, flashes, camera cases, cameras, lens cloths, you name it. But Vivitar only really made one thing: the Vivitar name plate. Other companies made all the Vivitar gear, and they just slapped their brand on it and sold it. It was a viable model for decades.

I’ll admit, I do love some of the gear they produced. I have a Series One lenses, one of their premium offerings. It’s a unique focal length and has nice properties which I will expound upon in a future post. But not everything they did was all that excellent.

This camera was actually made by Cosina in Japan. Cosina is a company that is kind of the opposite of what Vivitar was. Cosina makes a great many things, but puts its name on almost none of them. They make cameras for any number of other companies: including Nikon (the FM-10 student camera is one of their products). They also own the Voigtlander name and produce a line of 35mm rangefinders, excellent optics, and even a medium format under that name. They build lenses for basically everyone. And they produce this camera’s descendant: the Vivitar V3800N.

The 400/SL was a product of the 70s. It’s competent, but uninspiring. It’s a very straightforward camera I bought because of the lens that was being sold with it. It’s a typical 70s tank of an SLR. I told myself it was a good buy because it very cheap (the going rate for these is around $40) and it has more shutter speeds than my Soviet SLRs, thus being more useful. It is a bit heavier than most of the other SLRs I own, and the shutter is loud. Louder than the AK-47 bolt slap sound of the Zenits. 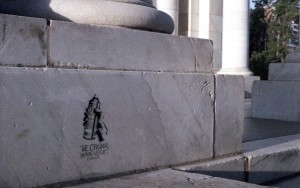 As I said, I only bought this camera to get the lens that was on it. It’s an excellent lens, which I will go in to another time. I’ve held on to this body even though it wasn’t a strictly planned purchase. It’s in good shape, and works well. The weight it has keeps it home when I hike, but that’s about the only thing that limits it. While I keep it, it doesn’t inspire the level of love other cameras I own do. It’s not inspiring the way my Zorki 4k is. It doesn’t generate the level of passion my Nikon F3 does. It just soldiers on day in and day out, doing what I ask of it when I test a new lens or emulsion with it.

Which is why I’ve kept it, even though it’s a little plain jane.