Childhood Dreams- the Diana no. 151 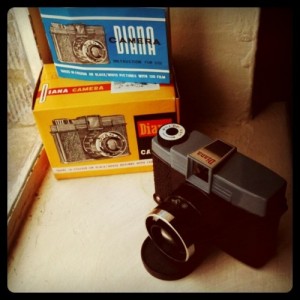 When I was a wee sprout, I won a Diana in a magazine sales contest. I wanted that camera. When I got it, I studied it carefully, practiced the zone focusing method it used, and got myself ready to use it in a highly intense fashion that was very unusual for a hyperactive kid. But my mom didn’t want to fiddle with black and white roll film she couldn’t have developed at the JCPenny store, so she got me an Instamatic with 126 cartridge film. Eventually, they stopped making that film, and the Instamatic became a door stop.

I often wonder if things would have been different if I’d of gotten in to black and white 120 when I was in grade school. I wonder if I would have been happy with the heavy atmosphere the Diana produces. It was around 1976, about the time the first artistic work with the Diana was coming out. Who knows.

Many years later, Lomography came out with their version of the Diana. I was happy to see it. More film cameras shooting 120 film could not be a bad thing. Demand insures supply. But I must admit I was disappointed with the results the thing produced. Not at all like the original camera. Closer to a Holga. Just not the same, just not what I wanted. 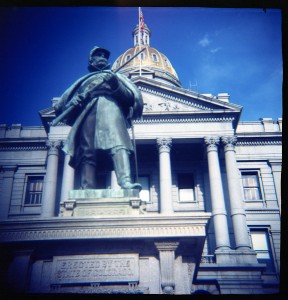 I resisted the urge to buy one off of eBay for years. eBay is the home of a thousand, thousand broken dreams. I’ve had some pretty bad luck getting cameras off of there. Craigslist was even worse. So I sat and watched and would idly wonder on occasion what it would be like to own one again. I finally broke down. I finally got myself a NOS Diana off eBay. The plastic even smells the same. And I am enthralled with it.

Some things are as good as you remember them. It’s just a shame that more things aren’t. My inner grade schooler is pleased. He’s pretty proud of his Diana. He likes it a lot.