Too cold. Too far away. Too high up. And ultimately, not worth it to the miners. Boston Mine Camp. 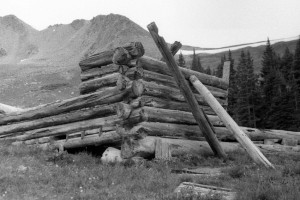 I love places like this. They call to me in a way few others do. Places where the desire to get rich led people to what was the outer reaches of livable land to set up shop. The Old Boston Mine was a vein of gold in a mountain that drew people to live at 12,000 feet. Mountains aren’t especially forgiving at that height. Not too long ago, people were killed at the treeline by lightning from the typical afternoon thunderstorm while they hiked. I can’t imagine living in a place like that. 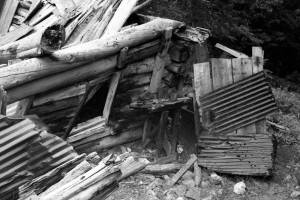 Ultimately, the gold was too full of impurities. It wasn’t possible to make any money mining it, and the people drifted. They left behind the mine, the tipple, a few cabins, and a boarding house.

During the 1980s, someone stabilized one of the cabins and did some mining of their own. It didn’t pan out for them either. After a while, they drifted too.

Sometimes I wonder what became of these people. These places weren’t significant enough to have a history, and no one seems to have written down who the miners were or what became of them. They were here, they worked for a while, they were gone. 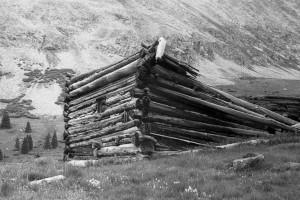 Old Boston is probably as populated now as it was then. Hikers camp above the ruins on the mountain or pass through on their way to the summit. The gulch is picturesque, drawing photographers to shoot it. The meadow adjacent to the camp is a riot of wildflowers, a carpet of beautiful color and buzzing bees. And aside from the sound of wind and water that shaped the mountains eons ago, it is quiet.

While we were there, children scampered among the ruins and sent selfies from atop wood beams. DSLRs snapped away. And yet, when the cold drizzle thinned everyone out, it was peaceful to be there. We’ll probably come back, and camp above the ruins with the hikers. 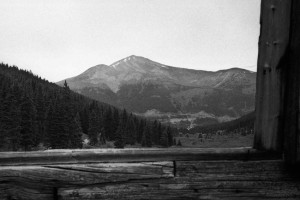 Places like Old Boston are my favorite places. Too far up, too far away, and too hard to love. But beautiful and desirable in their own way