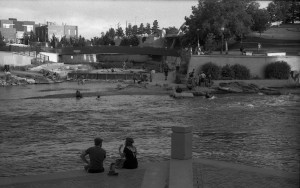 Many moons ago, I happened across a roll of Agfa APX 100. I was just dabbling when I used it, but it’s been a constant in my freezer and in my camera ever since. I love the fine grain it has. In fact, the first time I printed with it, I had issues grain focusing. I wish I’d of bought more of it back in the day.

Agfa fell apart and died. And then it didn’t. Or maybe it did. The name crops up here and there and yon, with successor companies.  APX 100 keeps popping up as well. The source was originally marked Germany, and is now marked Europe, but that doesn’t really tell you anything.

I have a freezer that is largely APX 100. Some of it dated back to 2006, frozen solid. That’s the definite real deal. There’s some from 2010, and some added as recent as this month. The new stuff is helpfully emblazoned “New Emulsion” to differentiate it. But I’m not overly sure it is. It acts like the old APX 100. Dev times at 100 ISO are spot on. It even works when pushed to 800, as I like to do shooting portraits. It’s been suggested this stuff is just the last master roll cut down and spooled. Well, maybe. The 2018 expiration date seems a little past it’s prime for that to be the case by my reckoning of the dates those master rolls were made.

There’s a rumor it’s a re-created emulsion by the guy that owns Maco films. Or maybe it’s Rollei. Or maybe nobody knows. 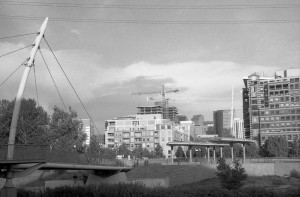 All I know is that I love this emulsion, and I have been reluctant to let it go for some time now. I hope this is new stuff that’s as good as the old stuff. I’d love to spend some years still shooting it. It shoots street great. It does well with skin tones on portrait work. I’d shoot the stuff every day if I could ever figure out if there’s a steady, reliable supply of it. Trying to figure out what’s what with Agfa film is the analog photography whodunit. There’s a lot of possibilities, but no real definitive answer.  While the source of other Agfa films such as the CTprecisa seems to be well known, APX 100 remains a mystery. 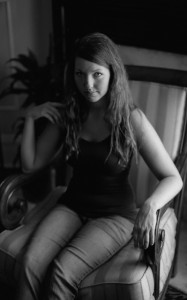 It may not be the real deal, but I still love it. Whatever it is, I’ve grown fond of being able to walk in the cooler at my local pro photography shop and buy a half dozen rolls off the shelf. I’d like to continue to be able to do that for a long time.